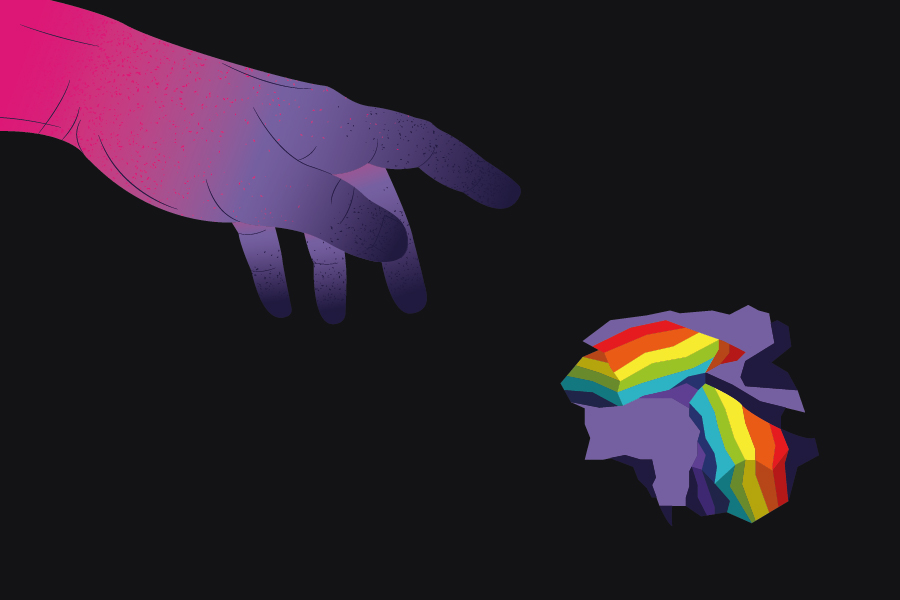 On the LGBT+ issue, Francis has been a great PR person and a poor prophet. The time has come to shed any illusions that a top-down change in Church teaching will come. It’s time to recognize that on this issue the Vatican’s stance cannot be a moral compass.

Unusual as it may seem, let me reveal at the outset what I am not going to do in this article.

When the editors of Magazyn Kontakt asked me to comment on Cardinal Reinhard Marx’s recent statements on LGBT+ issues, I initially felt a natural temptation to stay on the beaten track for this journalistic journey. The recipe for the article was actually ready: Here was a progressive German cardinal, an advisor to Pope Francis, once again making a public statement (in an interview with the German weekly Stern) that the catechism’s teaching on homosexuality might one day change. He went on to add that if two people of the same sex love and support each other, then such a relationship has some value after all. Moreover, although such a relationship will never be a marriage („we can’t offer them a sacrament”), if someone wants to scare gays into hell, one „doesn’t understand anything.”

In the same interview, Cardinal Marx proudly emphasized that on the issue of tolerance towards queer believers he is not just a theoretician. Indeed, he admitted that some time ago in Los Angeles a couple who were in a relationship approached him and asked for a blessing. The hierarch granted the request, although he stressed that it had nothing to do with marriage.

Let me get back to the unrealized „recipe for an article.” Quoting the progressive statements of the papal advisor would have to be juxtaposed with several statements by Polish hierarchs. Although Archbishop Marek Jędraszewski’s famous „rainbow plague” is already three years old, the Cracow metropolitan does not miss out. Just this past fall, speaking to students at Pope John Paul II University in Krakow, for example, he declared that LGBT people „deny the dignity of their own humanity.”

My unwritten text would, of course, require a punchline. It could be a rhetorical question along the lines of: „Will our bishops finally follow in the footsteps of the German hierarchs? When will they take the example of Pope Francis, who already at the beginning of his pontificate said: If a person is gay and seeks God and has good will, who am I to judge?”

If I wanted to deepen my analysis, I would possibly add the usual mention of a spark of hope. After all, not the entire Polish Episcopate speaks the language of Archbishop Jędraszewski. Traditionally, then I would have to mention the two obligatory names of progressive hierarchs: the Primate Wojciech Polak and Archbishop Grzegorz Ryś: Here are the swallows of change in the Polish Church, let us all care about them and respect them.

This time, however, I am not writing such a commentary.

March 2022 marked the beginning of the tenth year of Francis’ reign in the Church. Exactly at this time his pontificate found itself in the greatest crisis since its beginning. The pope’s lack of an unequivocal stance on the conflict in Ukraine has largely undermined the image of a prophet who can speak inconvenient truths „in season and out of season.” As a result Francis’ supporters became confused, while his enemies – triumphant.

Paradoxically, this situation has exposed a naive and unrealistic belief in the moral omnipotence of the papal office, shared by both parties. Controversial as it may be: in my opinion, the fact that in the context of the Russian-Ukrainian conflict Francis fails to call the aggressor by his name is of little importance for the fate of the war. For obvious reasons the Pope is not an authority for modern Russians, whose minds we would like to change, whereas Western societies, on whose opinion Francis is likely to have real influence, take a sober and unequivocal view of the current war, unequivocally siding with Ukraine and supporting the sanctions their governments impose on Russia. For Catholics, the Pope’s voice would be an important symbol rather than a real factor in clarifying the situation. After all, they follow the events in Kiev or Bucha constantly on TV, and no one, least of all the clergy, has to explain the facts to them. So if anyone or anything is losing out on Francis’ silence, it’s not Ukraine or Catholics, but rather himself and the authority of the papacy.

I think that a somewhat similar thing happens with the Church’s attitude to LGBT+ people. Catholic reformist circles (which I am part of, at least to some extent) are eager to formulate demands for changes that the Vatican should make in its teaching. However, a time might have come to recognize that this is an archaic approach, and to stop giving so much authority to various (by the way, quite variable) statements by the Pope or his associates. For there is something humiliating and certainly clientelistic in this looking up to Rome. I myself came to this conclusion during the synodal consultations I co-organized, which the Wiara i Tęcza (Faith and Rainbow) Foundation has been conducting among LGBT+ Catholics in recent months.

We don’t care for care

When Wiara i Tęcza organized similar consultations ten years ago in preparation for the synods of bishops on the family (which took place in 2014 and 2015), we formulated an entire list of demands for the church’s approach to LGBT+ people based on our discussions. All of them, remain relevant and almost identically phrased as we approach the new synod.

However, compared to what I heard from LGBT+ believers seven and eight years ago, today I am struck by a much greater sense of subjectivity among synodal consultation participants. Especially representatives of the younger generation emphasize that they do not expect „recognition” or „pastoral care” from the Church, but – if they are to stay in the Church – they want to co-shape what the Church looks like in a partnership way. „We are not interested in any initiatives ‚for LGBT+ people,’ but only in ventures created ‚with LGBT+ people.’ Nothing about us without us,” said one of the participants in a synod’s discussion organized by Wiara i Tęcza.

Another impression I have after consulting with LGBT+ Catholics is that the Church’s and bishops’ say regarding their issues matters less and less. I don’t intend to conceal that this is cause for optimism for me. After all, in the tenth year of Francis’ pontificate, it is clear that on the issue of non-heteronormative people, the Pope will not fundamentally revise the Church’s approach. All he can afford is an (otherwise commendable) softening of the language. It was during Francis’ pontificate that the Vatican upheld the ban on ordaining homosexuals as priests (2016), issued the transphobic document of the Congregation for Catholic Education „Male and Female He Created Them” (2019), and banned the blessing (not sacramental, of course) of same-sex couples, which had been quite common in the West (2021).

Thus, on the LGBT+ issue, Francis has been a great PR person and a poor prophet. The time has come to shed any illusions that a top-down change in Church teaching will come. It’s time to recognize that on this issue the Vatican’s stance cannot be a moral compass. Catholics make up almost 18 percent of the Earth’s population. Assuming that in any society non-heteronormative people make about 10 percent of the population, it is easy to count that there are currently more than 100 million LGBT+ Catholics in the world. It is unacceptable that the fate of such a large group of people should depend on the moral judgment and worldview of successive popes, but also on the views of bishops or priests.

For history teaches that this can sometimes be a fickle currency. In the 1970s and 1980s, the LGBT ministry in the United States flourished tremendously. This was happening until the Vatican issued an abrupt „U-tur command. In 1986, Cardinal Joseph Ratzinger, then president of the Congregation for the Doctrine of the Faith, promulgated the famous „Letter to the Bishops of the Catholic Church on the Pastoral Care of Homosexuals”, maliciously referred to as the „Halloween Letter” due to its publication date. This instruction threw numerous Catholic LGBT+ communities out of the Church spaces to the street, while hitherto friendly clergy members began to distance themselves from those communities almost overnight.

Without a fundamental revision of the Church’s doctrine on LGBT+ people, the fate of non-heteronormative Christians will thus always remain uncertain. For any new pope, new bishop or even new pastor in the local parish will be the master of their „life and death” in the Church.

Or perhaps we could go even further and recognize that it is not only the current content of Church teaching on homosexuality, bisexuality and transgenderism, but the very fact this teaching exists that is unmoral? Obviously, discrimination against non-heteronormative people must be condemned and stigmatized. Yet, the ethical differentiation of people according to any characteristics that are not the object of their choice and don’t involve pathological behavior or antisocial attitudes, is unacceptable. Therefore, instead of revising its position on LGBT+ people, the Church should abandon such teaching altogether. After all, moral judgment and ethical requirements for people cannot depend on characteristics such as gender, skin color, nationality or sexual orientation.

Although the author is a member of the Council of Wiara i Tęcza Foundation, the theses contained in the article express solely his personal viewpoint.

Marcin Dzierżanowski is a co-founder and the first president of the Wiara i Tęcza (Faith and Rainbow) Foundation, currently a member of the Foundation’s council. Also a co-founder of the „Przekażmy sobie znak pokoju” (Let us offer one another the sign of peace) social campaign, journalist, publicist, editor-in-chief of „My Company Poland”, former editor-in-chief of „Wprost” weekly. 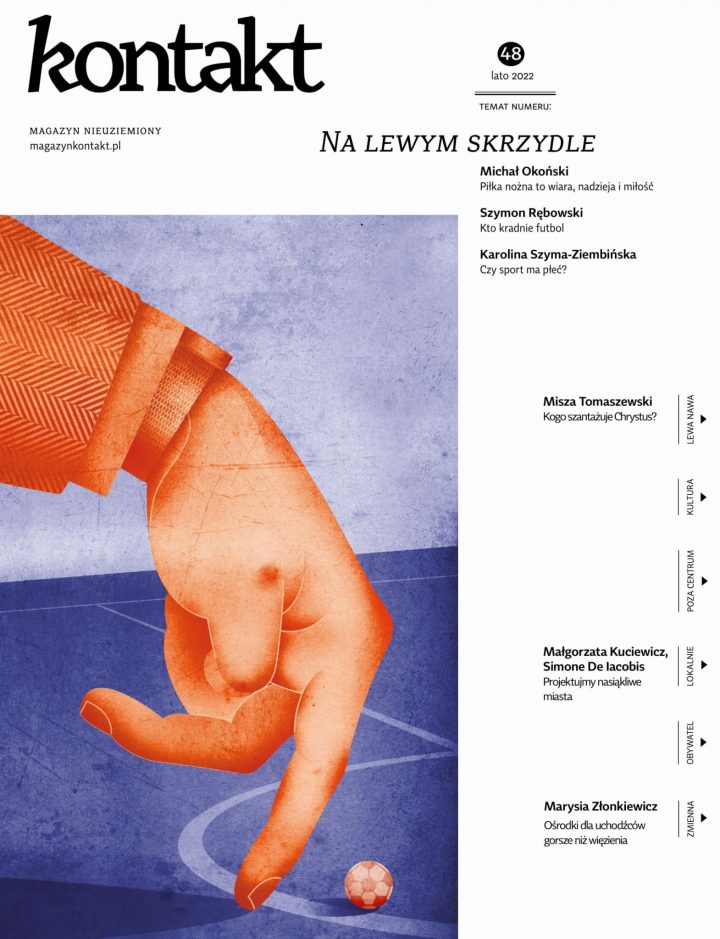